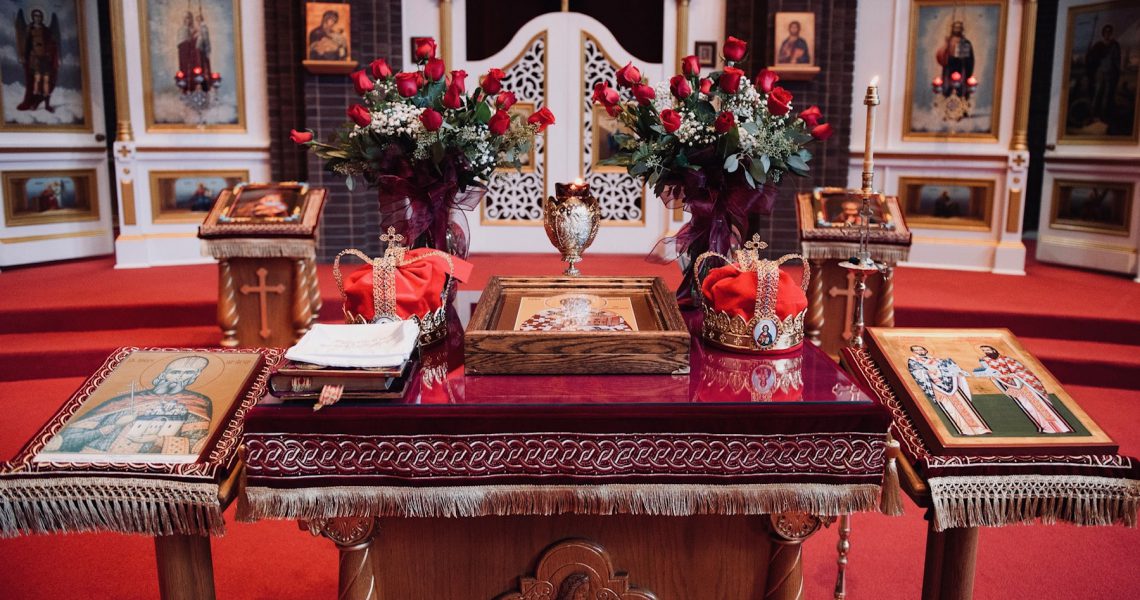 Eastern Orthodox wedding ceremonies, because they adhere to sacred Tradition, often seem quite different when compared to conventional “weddings” you might see in the United States these days.

In the Eastern Orthodox Church, everything done embodies mystical truths and realities of the ancient Christian Faith. Every item, every gesture, every scent and sound, has its purpose. Weddings in the Orthodox Church are no different. In this post, we walk you through the different parts of an Eastern Orthodox wedding ceremony (this is different from Coptic Orthodox!). We also explain the symbolism behind the events that take place, in the context of the Orthodox Faith.

There are two main parts in an Eastern Orthodox wedding ceremony: the Betrothal (engagement) and the Crowning (marriage). Within the marriage ceremony, several other things take place, including the tying of hands, partaking of the common cup, and performing the dance of Isaiah.

Before any of this takes place, the officiant (priest) places lit candles in both the bride and groom’s hands. These white candles represent both purity and virtue, and Christ’s light shining upon the couple. By holding them, the couple expresses their willingness to attain communion with Christ through this marriage. The candles will remain lit until the end of the ceremony, and are usually given to the couple as a keepsake afterward. If the couple prefers, the candles can remain in the church to be lit during services. (We never throw them in the trash!)

The Betrothal is the beginning of the Orthodox wedding ceremony. During this part of the service, the exchange of rings takes place. The rings, traditionally held by the Kum, are exchanged between the couple three times to signify the Holy Trinity. The rings also represent the couple’s pledge to share and exchange spiritual and physical goods, pledge eternal love, and signify that one’s weakness is compensated by the other’s strengths. “Alone, one is incomplete – together they are whole.”

In preparation for the Crowning, the couple hand the candles to the Kum and the second witness (usually the Kuma) standing behind them. Then, the priest joins the couple’s right hands and ties them with a bridal cloth.  The priest reads the prayer: “Join these thy servants, unite them in one mind and one flesh.” The hands remain tied throughout the entire service. This represents the ‘oneness’ of the couple and the spiritual tie that unites them.


Next, the priest intones: “O Lord, our God, crown them with glory and honor.” It is at this point that the bride and groom become King and Queen of their own domestic Church – their home.

Joining of the right hands

After the priest crowns the bride and groom, he then joins their right hands. This is another key moment in an Orthodox wedding ceremony. He ties them with a bridal cloth and reads a prayer, asking God to unite the bride and groom in “one mind and one flesh”. The hands remain joined throughout the entire service to represent the oneness of the couple and the the spiritual tie which unites them: belief in and submission to Christ.

Note: During this time the witnesses, who are standing behind the couple, take the candles from the bride and groom to hold until the end of the service.

The next main part of an Orthodox wedding ceremony is the partaking of the common cup. This ritual stems from our love for the miracle at the wedding of Cana of Galilee. At this wedding, Christ turned water into wine. And the couple then shares this cup of wine with one another, symbolizing the beginning of their new life together. Both the bride and groom each take three sips – representing the Holy Trinity.

Additionally, the common cup represents the sharing of everything by the bride and groom from that point on, even unto eternity. They will share their burdens and their joys, their material possessions and spiritual treasures – the sad times will be halved and the happy times doubled!

The last part of an Orthodox wedding is the Ceremonial Walk. We also call this portion of the service the “Dance of Isaiah“. The couple – with hands tied – follow the priest around a small table three times. The witnesses follow with candles in hand. The circular path they follow symbolizes eternity – beginning without end. It is the couple’s first walk together, reminding them of their sacrificial love for each other and the pledge they have just made to walk together as long as they live.

The service ends (as all Orthodox services do) with the dismissal. The priest removes the crowns, separates the couple’s hands, and bestows blessings from God upon the newly-weds. He tells them to “Go forth in peace” – a reminder that no one but God can separate them. After this, the congregation sings “Mnogaja Ljeta” (“God grant you many years”).

There are two main parts to an Eastern Orthodox wedding ceremony: the Betrothal and the Crowning. The Crowning then has different events within it, including the tying of hands, drinking from the common cup, and performing the ceremonial walk, or “dance of Isaiah”. Everything done during this ceremony comes with beautiful symbolism designed to communicate the Mystery of God’s joining one man and one woman to “become one flesh.”