Where Do Wedding Sashes Come From? 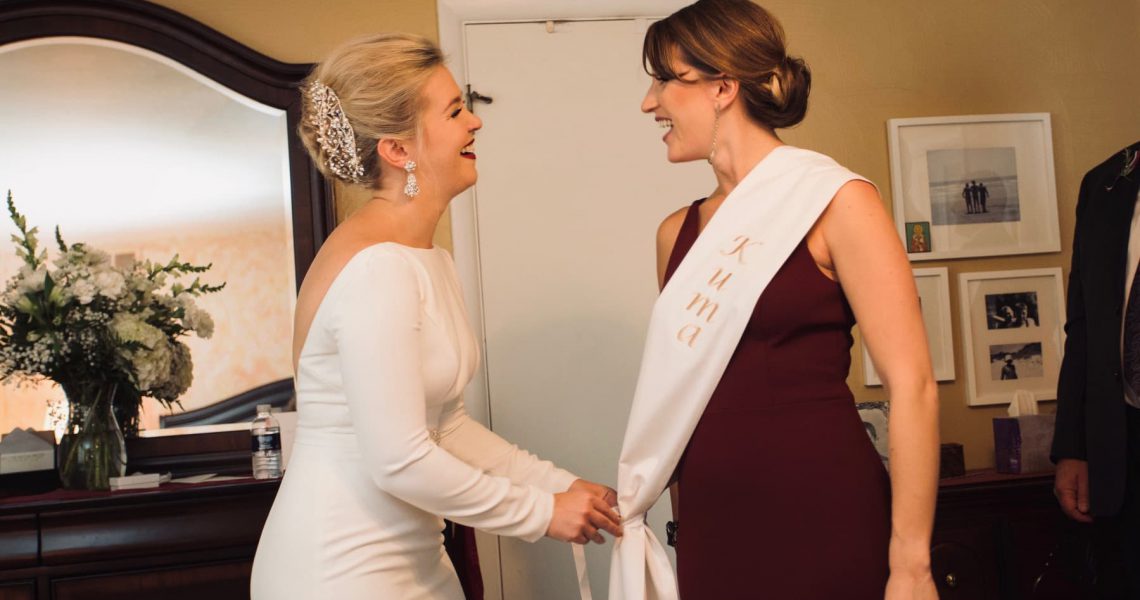 If you have ever attended a Serbian Orthodox wedding, you may have seen some members of the wedding party wearing sashes. Beautiful sashes either white or red, blue, and white, with words and crosses embroidered on them. Wearing these wedding sashes has become cultural tradition in many communities around the world. But where did these wedding sashes come from? What do they really represent?

The origin of the wedding sash

I’d like to share a story regarding the origination of the wedding sashes. This story really helped me understand their value and importance.

August 1914, the Great War. Two soldiers, wounded by a grenade, dragged one another to safety in a nearby village. The house in which they took refuge belonged to a young woman. Beside one of the doors they found a crate filled with embroidered cloths – sashes made by the young woman in preparation for her marriage. The soldiers used these sashes to tie their wounds and to stop the bleeding long enough to find medical staff to treat them. By some miracle, the soldiers survived, and one of them decided to keep the sash used on his wound. Some 60 years later, during the anniversary of the Battle won, the soldier took the sash with him. It is now located in a People’s museum.

Thus, the wedding sash became part of many Serbian customs.  Seeing its beautiful intricate embroidery and fine fabric, young women began making sashes to decorate their homes. They made them for bread baskets, icons, the threshold of the home, and many others. Often the wedding sashes included messages, like ‘Welcome to our home’, ‘Good Morning’, ‘Sweet Dreams’, or whatever message the young woman wanted to say. Each sash had a special meaning. Out of this custom then came the gifting of sashes. Recipients treasured their beautiful gifts, saving them and passing them to later generations.

This is where the wedding sash came from.  Young women made these hand embroidered sashes and saved them for their special wedding day. They used the sashes to decorate tables, horses and wagons (automobiles today), the ‘cutura’ or ‘buklija’ – a wooden bottle used for liquor and offered by the bride’s family to share with all guests – and lastly as a keepsake gift for the bridal party members. This custom still holds strong today!

Read More: What is a Kum in the Serbian Orthodox Church?

Need a sash for your Serbian wedding?

If you need sashes for the different members of your Serbian wedding party, take a look at our fully customizable white peskiri sashes. You can choose thread colors for embroidery, lace styles for trim, and more. Recognize and honor the members of your wedding party with unique, hand-made sashes you won’t find anywhere else!